Chris “CJ” Malone, considered a ‘jack of all trades’ in medium market radio, started in the broadcasting business at the tender age of 18. While in college, Chris wasted no time obtaining real world work experience. He was named full-time Music Director/Assistant Program Director and Afternoon Drive Personality for WQOX-FM in Memphis (Urban AC/ Smooth Jazz outlet) in 2003.

In addition to working his radio job and pursuing higher education, he also spent 3 years part time in tv news, as weekend Production Assistant and newsroom Assignment Editor at WPTY/WLMT. In the summer of 2007, Chris joined Entercom Communications to embark on a tremendous commercial radio opportunity to serve as weekend on-air personality for WSNA Snap! 94.1 FM (Rhythmic AC, CHR leaning outlet). Quickly over the span of a year he worked his way up to Assistant Program Director for Snap! 94.1. In addition to his obvious on-air and programming skills, Chris managed to contribute his talent to many other departments during his 5 years with Entercom Communications including: promotions, production, and administrative responsibilities around the radio station too.

In 2012, Chris accepted the position as start up Program Director and Afternoon Drive Personality for 96.9 WBZJ in Raleigh, NC. The same year he was voted “Radio’s Rising Star: Top 40 Under 40” in Radio Ink Magazine. The journey continued in 2014, as Chris served as Assistant Program Director and top rated Afternoon Drive personality on Urban AC 97.1 WQMG (consistently #1 35-54) and maintained Music Director/APD duties for Urban Gospel WEAL 1510AM in the Greensboro-Winston-Salem-High Point market. Chris served as On air personality for 103.5 WRBO in Memphis and Imaging Director for 98.9 The Vibe.

Chris Malone’s biggest career accomplishment came when he was selected by Audacy (formerly known as Entercom Communications) to create and execute WKAF 97.7 FM, Boston’s (DMA Market 10) first FM Adult Urban radio station. Within the first two months, the station achieved #1 status with AA 25-54 which remained for the entirety of Chris’ leadership of this station, which also gained great success with wide audience appeal (at the station’s peak top 10 Persons & Women 25-54). WKAF served a mass appeal audience with only a 2kw signal. A combination of total team effort and grassroots marketing were just a piece of the secret sauce. The station was quickly acquired by once competitor, iHeartMedia.

Chris is served the radio industry at a greater level as an Authorized Music Scheduling Consultant for MusicMaster, the industry’s most robust music scheduler & support team for station programming around the globe. He works directly with clients such as SiriusXM, Urban One, Apple Music, Cox Media Group, Audacy — just to name a few!

Currently, Chris Malone serves as Program Director and On-Air Personality for Stevie Wonder owned KJLH-FM in Los Angeles. Radio Free 102.3 KJLH is a gem that has been at the corner of community and culture for over 50 years. Under Chris’ leadership, the station has achieved historic ratings, produced several community events, and has undergone a complete programming makeover, shifting towards a millennial friendly Urban radio station.

In his free time, he enjoys collecting vintage vinyl, reading, spending time with friends, family, cheering for his favorite NBA teams, and attending church. You’ll be impressed by this site, as you’ll discover the work and inner thoughts of “radio’s best kept secret”.

Always up for a new challenge and networking opportunities!

Need a voice over talent for your production: CLICK HERE!

Setup for a live broadcast at Tiger Lane Park in Memphis

One year Anniversary Party for the 96.9 WBZJ listeners in Raleigh, NC. Impressive night! 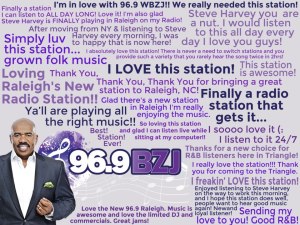 *Disclaimer: All images on this blog site are original or were obtained via Flickr images under CC for commercial use. Chris Malone bio pictures taken by PWR Photography.